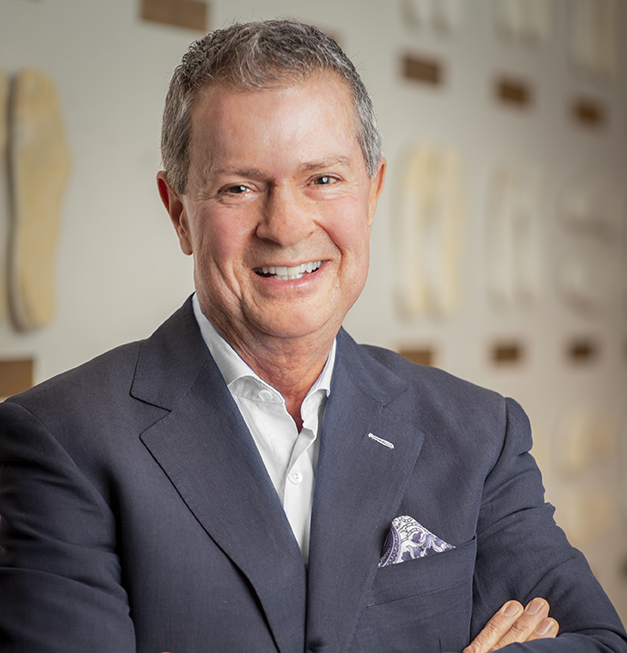 Greenawalt has made a significant impact on the chiropractic profession. He championed a national public relations campaign for the benefit of chiropractic and now serves as Chairman and Founder of the Foundation for Chiropractic Progress, the nonprofit foundation formed to spearhead the campaign. Kent has also helped revolutionize the way chiropractors treat patients by developing and patenting many products in the United States and abroad for everyday patient use.

In addition to his leadership at Foot Levelers, Inc., Greenawalt is a supporter of chiropractic education, as evidenced by the numerous grants, research studies, donations, education chairs, and scholarships awarded. He has received multiple awards from various colleges, including an Honorary Doctorate of Chiropractic from Cleveland Chiropractic College (Cleveland University-Kansas City) and a Lifetime Philanthropy Award from Parker College of Chiropractic.

Additionally, both Greenawalt and his father, Foot Levelers founder Dr. Monte Greenawalt, were named Fellows of the American College of Chiropractic, as well as Fellows in the Palmer Academy of Chiropractic, in recognition of their outstanding service to the chiropractic profession.

Kent Greenawalt is the recipient of several awards from chiropractic leaders, including the American Chiropractic Association’s Humanitarian of the Year award, the highest honor the organization can award to a non-chiropractor. The ACA also bestowed its President’s Award upon him for the invaluable educational and fundraising work he has done on behalf of the chiropractic profession.

He was Dynamic Chiropractic’s Person of the Year in 2001, recipient of The Master’s Circle’s most prestigious accolade, Humanitarian of the Year in 2003, and was presented with the Lifetime Philanthropy award from Parker College of Chiropractic and Parker Seminars in 2004, “in recognition of a lifetime of sharing and giving to the chiropractic profession.”

He was named as Northwestern Health Sciences University’s 2008 Brilliant Star Award honoree. The award was presented in 2008 at the Stars Among Us Gala. Kent is the first non-chiropractor to receive the prestigious award.

He also serves as a Board Member for the W. E. Skelton 4-H Educational Conference Center at Smith Mountain Lake, Virginia.

Greenawalt is recognized as a compassionate and caring leader. Within 48 hours of the September 11, 2001 attack on America, Foot Levelers organized an emergency matching-fund campaign for the American Red Cross, raising more than $500,000. Immediately following Hurricane Katrina in 2005, he again launched a timely campaign to share the outpouring of kindness shown by the chiropractic community in a united $572,453 donation to the American Red Cross. Foot Levelers and the chiropractic community received national recognition, being named to the American Red Cross “Circle of Humanitarians” in appreciation for generous giving and support of their humanitarian efforts.

Greenawalt was elected to serve on the United States Bone and Joint Decade (USBJD) Board as a member at large, representing patients and the public. In 2005, he was presented with Pro-Solutions’ Premier Recognition Award for his dedication to patient care and satisfaction.

In 2003, Kent Greenawalt again showed his passion for chiropractic, leading a group of individuals to form the Foundation for Chiropractic Progress (FCP). He currently serves as the Founder and Chairman of the Board for the FCP. A nonprofit corporation, The FCP aims to increase the number of people who seek chiropractic treatment regularly.

FCP works to educate consumers about the positive benefits of this treatment. The Board oversees a multi-million dollar marketing campaign to increase consumer awareness and build greater market share for chiropractic services. It is funded by national, state, and local chiropractic associations, colleges, leading chiropractic publications, vendors serving the profession, and individual chiropractors.