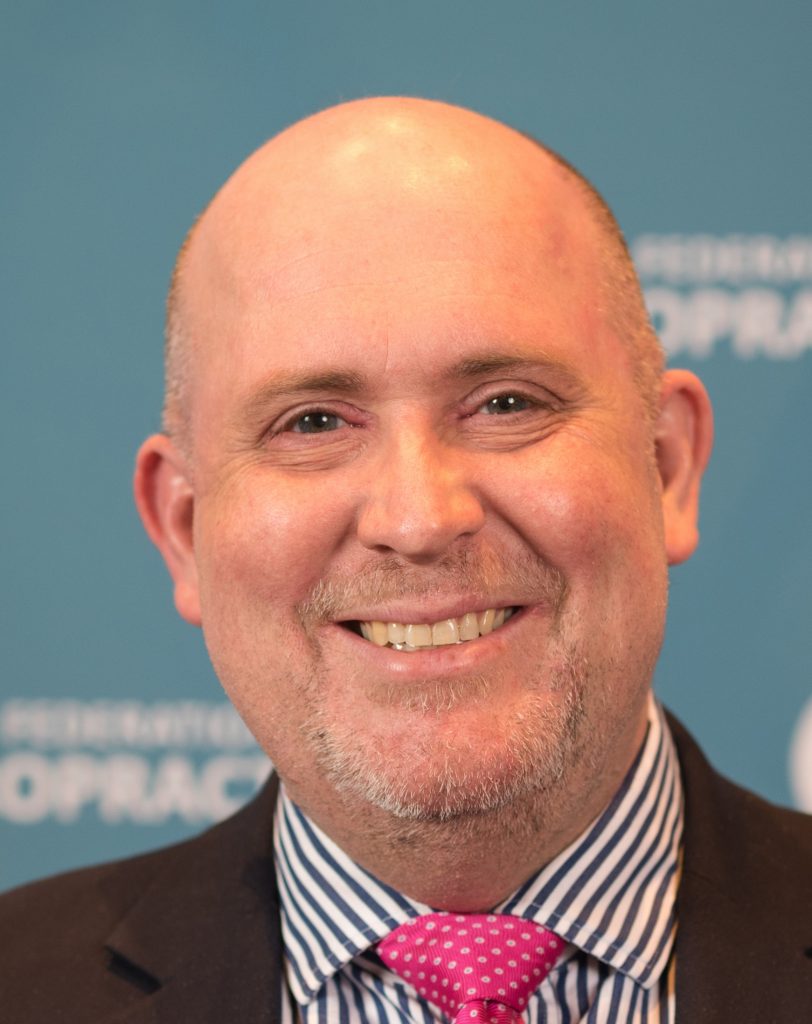 TOPIC: An EPIC Future: the Vision, Mission and Principles of the World Federation of Chiropractic

Richard Brown has been the Secretary-General of the World Federation of Chiropractic (WFC) since 2015. Headquartered in Toronto, Canada, the WFC has over 90 members in seven world regions. It is principally concerned with the support, empowerment, promotion, and advancement of the chiropractic profession internationally. In addition, the WFC is a non-state actor in official relations with the World Health Organization.

As owner and clinic director of a large interdisciplinary clinic in Stroud, Gloucestershire, Brown gained first-hand experience in working collaboratively with other health professionals, including general medical practitioners, surgeons, physiotherapists, exercise professionals, and podiatrists. As a chiropractor, his main area of work was in spinal disorders, specifically the diagnosis, management and care of back and neck pain.

In his clinical practice, Brown worked extensively in professional sport, including the English Premier League (football), elite athletics and Moto-GP motorsport. He served as a member of the medical team in the Athletes Village at the London 2012 Olympic Games.

In 2015, Brown spent time working with under-served communities in Botswana as part of World Spine Care, a not-for-profit organization committed to sustainable, evidence-based spine care. In 2019 he was appointed as a director of World Spine Care (US) and became its vice-president in 2021. He is the founder and immediate past Chair of Trustees of the Chiropractic Research Council, a U.K.-based charity dedicated to increasing research capacity to support patients and the public in accessing quality spine care. Brown has educational experience as a senior lecturer at the University of South Wales, and served on the Academic Board and Board of Governors at AECC University College. He is an adviser to the Society for the Promotion of Chiropractic Education. He served for a number of years as an examiner for the UK regulator’s Test of Competence and is on the advisory board of the International Board of Chiropractic Examiners. He has lectured extensively in the UK and internationally on professional standards and the status of the chiropractic profession.

With a Masters Degree in Law (LL.M) from Cardiff University, Brown has for many years worked as an expert witness in both the U.K. and Ireland, and retains a busy medico-legal consultancy. Covering areas of clinical negligence, fitness to practice and statutory regulation, he has also been involved in drafting codes of ethics and standards of proficiency in Europe, Africa, and Asia. Brown has been instructed in over 400 matters involving fitness to practice, and has appeared before the Professional Conduct Committee on numerous occasions over the past 21 years.

As Secretary-General, Brown is responsible for leading the Secretariat at the WFC headquarters in Toronto, and for strategic and policy development of the organization. He is married to Caroline, and has two grown children. Brown enjoys walking, motorcycling, and following English professional football. In the distant past, he served as a reserve police officer, climbed Mount Kilimanjaro, and was a member of a chiropractic band, Audible Release.